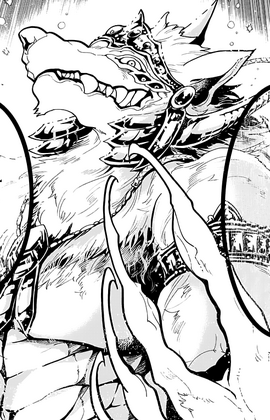 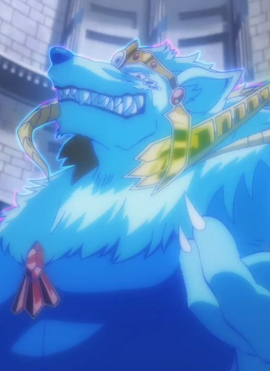 Valefor seems to have a casual attitude and seems to be quite lazy. He also seems to like being flashy, but is quick to admit his initial look is a ruse. While being brutally honest to Drakon, he's also fair in choosing a King, awaiting Sinbad and Hinahoho's entry in the Treasure Room before beginning his trial to find his King. Valefor is objective of violence and dislikes others underestimating his "Miniform" just by the weak appearance of it.

Valefor used to live in Alma Torran and was part of King Solomon's Household.

Valefor, along with the rest of the Djinn, were created by King Solomon from Rukh.

Valefor materializes when Drakon, Ja'far, Mahad, Falan, and Vittel reach the treasure room and Drakon touches the necklace vessel. Valefor proclams himself as the djinn of falsehood and prestige. He is disappointed when he sees that Drakon's group are the only people in the treasure room, and transforms into a smaller wolf, claiming that his king candidates are disappointing.[1]

Valefor then destroys Falan's vessel, claiming that he recongized the fake vessel's stench from "that world", Alma Torran. Valefor asks Drakon what he would do with a king's power, and is once again disappointed in Drakon's answer, which he claims has no desire and thus Drakon is not capable as a king vessel. [2]

When Sinbad and Hinahoho arrive to the treasure room, Valefor sets up the final trial, claiming that he wants to be fair to all the challengers. He states he will choose his King based on whoever captures Minifor, and that there can be no violence during the trial. [3] When Sinbad wins the trial, Valefor commends him for his strategy but comments that Sinbad basically cheated.

When Falan turns Ja'far, Vittel, and Mahad into the black djinn, Valefor explains how to save them. He states that while he normally doesn't care about what humans do, he doesn't want Falan to keep causing trouble. [4]

After the black djinn is defeated, Valefor chooses Sinbad as his king vessel.

Valefor has the ability to control the 2nd type of Magic subtype, Ice Magic.

Valefor can willingly change his size and shape.

Valefor's Metal Vessel is a golden necklace with a red jewel at its center.

Sinbad can manipulate ice and subzero temperatures. He can freeze everything around him, people included, in a matter of seconds. This ability only affects those who Sinbad sees as enemies.

In this equip, Sinbad takes the form of a nine-tails fox. He can manipulate Ice magic with his hands.

Sinbad throws multiples ice picks toward the opponent. It is said that despite its appearance, it is quite a powerful technique.

Valefor states that Sinbad was an interesting person and couldn't wait to see what would happen.

Although at first excited to be inside his metal vessel, Valefor showed immediate dislike when seeing Baal; the reason being was that Baal always treated Valefor as if he were a cat, when he states repeatedly that he was a wolf. Valefor also stated that he hated Baal being: "straight-laced, and overly-serious" and that he doesn't changed his mind.

Retrieved from "https://magi.fandom.com/wiki/Valefor?oldid=77900"
Community content is available under CC-BY-SA unless otherwise noted.