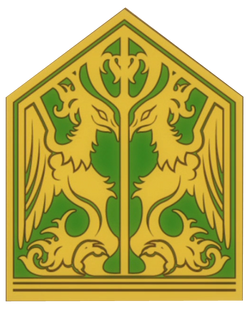 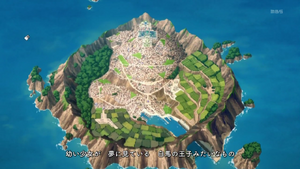 Sindria Kingdom (シンドリア王国, Shindoria Ōkoku) is a country established and formerly ruled by King Sinbad. Sinbad has founded the Kingdom of Sindria when he was 18 years old after establishing an agreement with Parthevia. [2] The old location of the Sindria Kingdom was destroyed by Parthevia and Al-Thamen which leads the country to relocate to the southern sea. [citation needed] After his abdication, it is currently ruled by Drakon. [citation needed] The Sindria Eight Generals retire after some of them have to take over their parents' spot as rulers of their respective countries due to their parents taking up roles in the International Alliance. Sindria Kingdom is a part and leading country of the Seven Seas Alliance and now currently located at an island in the southern sea.

Sindria is a large island with several smaller islands surrounding it. It seems to be surrounded by a tall rock wall.

In this area private houses and stores stand side-by-side. As the population grows, people make extensions by stacking it on top, resulting in a tight and complicated town scape packed with cubed-like buildings.

Its open in the morning and at dusk. Since inhabitants and travellers gather here for trading, it's always very crowded with people.

The South sea is infested with ferocious Southern Creatures. However, powerful Sindrian troops protect the merchant ships and passenger liners at all times, making sure everyone has a safe voyage.

Exotic Fruits are a staple of Sindria. Due to the low yield, merchants from the continent pay a great deal for the precious fruits of the South Sea.

It's an area especially designed to welcome people from outside the island. Besides luxurious accommodations and taverns, there are also recreational facilities like casinos, theaters and arenas, making it a flourishing place even at night time.

Habitat of the diverse creatures from the South Sea. Two kind of birds are the Dunce and the Papagoras bird.

Is a wild bird of the southern sea that lives in the Sindria forests. Its beak is used as a weapon as it's strong enough to break boulders. They are strong birds that can even face enemies much larger than them. They live in flocks and the strongest bird becomes the leader. Another unique feature of them is that if they encounter an animal stronger than the papagoras, they make it their boss and go under its protection while becoming its subordinates. Their current boss is Masrur. These birds are delicious when grilled.[3]

Where the private living quarters of King Sinbad and the officials close to him are situated. People who are granted access to this area are strictly limited to only a few.

Military facilities are assembled in this area, which include the armory, military training grounds and the barracks.

The training grounds for martial artists. Other than the soldiers in the national military forces, guests can use this facility also.

A place for the exchange of knowledge. It includes a library and a school.

This is the living accommodation for guests.

The bell is rung every two hours (according to sundial) to tell people what time it is.

The national administration center, where the civil officials attend to their duties. The great hall at its ground floor is where his Majesty and his officials hold a mass meeting every morning and where Sinbad grants an audience.

The first Sindria was founded when Sinbad was 18, after he obtained Valefor and Baal. The land and infrastructure cost 10,000,000 DINARS to purchase from Parthevia. [4]

Shortly after its establishment, the first Sindria was caught in the middle of a Parthevian power struggle greatly influenced by Al-Thamen. The fall of the first Sindria left a deep scar in Sinbad and is the reason why he is half-fallen into depravity.

A few times a year the Southern Creatures that inhabits the waters around Sindria will get past the lookout and come attack the island. It is the duty of the King and the Eight Generals to fight them off whenever they attack. Sinbad turned this attacking of the southern Creatures into a performance. It calms the people's fears and earned them tourist. The southern creature that was killed is an abundant source of protein and it is distributed throughout the country to be feasted on.

Sindria was first shown 6 months after the events of Balbadd, when Aladdin, Alibaba, and Morgiana came there to calm down and train. During their stay, they get to know Sindria's Eight Generals and participate in the Mahrajan Festival.

Community content is available under CC-BY-SA unless otherwise noted.