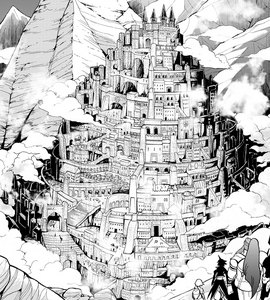 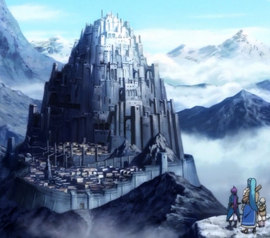 Sasan Kingdom (ササン王国, Sasan Ōkoku) is a small and landlocked religious country surrounded by mountains on all sides. It is ruled by the Knight King Darius Leoxses and part of the Seven Seas Alliance. The country produced a vast natural resources of iron, gold, silver and other metals from the surrounding mountains, and its noted for having the world's highest quality. Because of its difficult terrain, the country itself can only be reached by foot.

Because of its religiously devoted culture, the country is often called as the Land of Purity. They revealed to be descendants of the original humans from Alma Torran. And they worshiped Solomon as God of Sasan, although his name was long forgotten by the Sasan people.

The foundation of Sasan Kingdom traced back the time the original humans fled from Alma Torran after its destruction.

Because of its religiously devoted culture, they viewed the outside world impure and became isolated to the rest of the world and broken off any trade with other countries except the Reim Empire.

Prior to the formation of the Seven Seas Alliance, there had been no changes in their culture and isolated policy for hundred years until Sinbad and his Sindria Company arrived and established trade and diplomatic relation with the Sasan Kingdom.

Religion holds an important role in the Sasan Kingdom, they believed in the Old Gods which was introduced by the Reim Empire. Drinking alcohol is forbidden in this country, and the men of Sasan are not allowed to look at women in the eyes. Even hair styles must be in accordance with religious teachings.[1] Interestingly, all the men had their bangs covered their left face while the women covered their right face.

The Sasan Knights are the high-ranking clergymen who synthesized Sasan's doctrine and are absolute guide for its citizens, in which they're the governing organization that protects in the country.The Knight King, the sovereign ruler is also their Secretary General. They prized their doctrine more than anyone in the county and also the strictest followers, which is difficult for anyone or even outsiders to join them.

They viewed the outside world impure and pagans, which developed a xenophobic attitude towards outsiders. They severed their contacts and trade to other countries except the Reim Empire. Foreigners who visited their lands were forbidden to leave their designated area during the night. However, they welcomed anyone who're willing to share their beliefs. The citizens even knights were forbidden to visit the outside world.

They believed that the Sasan's natural resources were the blessing from the Gods, which they cannot be sold to outsiders.

It is unknown how much the country and its doctrine changes after joining the Seven Seas Alliance. Darius Leoxses and his knights were able to leave their homeland to answer Sinbad's call to fight the Medium.

The people of Sasan Kingdom are descendants of the original humans from Alma Torran. Much of Sasan's religion influence from the Torran culture and myth that was passed on for many generations. They worshiped and admired King Solomon as God of Sasan, although his name was long forgotten but his stories of how he unites many races in Alma Torran has been remembered and admired by the Sasan people.

The Sasan Kingdom has an army of knights, equipped with heavy armor and weapons. The kingdom contributes its forces to the Seven Seas Alliance army.

Retrieved from "https://magi.fandom.com/wiki/Sasan_Kingdom?oldid=75138"
Community content is available under CC-BY-SA unless otherwise noted.