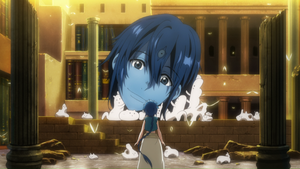 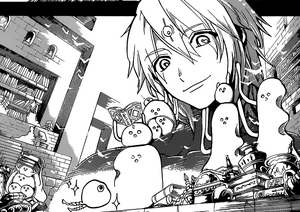 Aladdin begins fighting Judar with the assistance of Ugo. Aladdin suffers a loss causing Ugo to go out of control, inflicting heavy damage on Judar. Aladdin ends up asleep for a long period of time. [3] During the time that he is asleep he is summoned to the Sacred Palace where he talks to Ugo and meets Solomon, attaining Solomon's Wisdom. [4]

After Titus dies in his sacrifice to prevent Matal from falling into depravity, he arrives at the Sacred Palace where Scheherazade appoints Titus as the new Magi of Reim Empire. Ugo agrees and sends Titus back to his home. [5]

Arba assists Sinbad as they break into the Sacred Palace by using Al-Thamen's power and thirteen Metal Vessels.[7] Sinbad attacks Ugo in order to access the full power of the Sacred Palace; however, Ugo stops Sinbad and returns his Rukh back into the world's Great Flow.[8] After defeating Sinbad and then David Jehoahaz Abraham, Ugo places David and Ill Ilah stored into a fish tank, in which David is free to create a lower-order world.[9]

David is seen questioning his duty before coming to the realization that he must help Sinbad become god, he pulls Sinbad's Rukh from the great flow causing a giant flood of Rukh to enter the Sacred Palace. Ugo, shocked that Sinbad is able to maintain his consciousness, questions how it's possible. David answers his question, stating that Sinbad's Djinn kept hold of his Rukh allowing David to pull him back. Sinbad's Djinn restrain Ugo allowing David to put him under a illusion, whilst Sinbad takes over as god much to the shock of Arba, Sinbad's Djinn assume their position as the Guardians of the Sacred Palace. [10]

Retrieved from "https://magi.fandom.com/wiki/Sacred_Palace?oldid=73007"
Community content is available under CC-BY-SA unless otherwise noted.