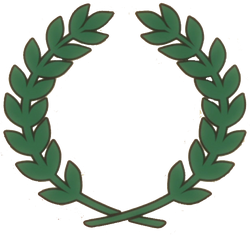 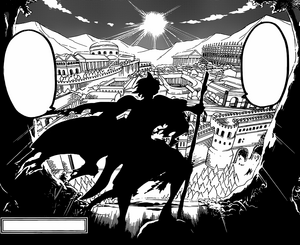 Episode 33
The Reim Empire (レーム帝国, Rēmu Teikoku) is the world's largest nation protected by the Great Priestess Scheherazade, who was one of the four Magi of the current era. After Scheherazade's death, she was replaced by Titus Alexius, who was her subordinate and clone, as the empire's new Magi. The empire is the most powerful and longest leading superpower in terms of military, technology, and economy in the world.

Like the Kou Empire, the Reim Empire has Dungeon Capturers. Previously, Alibaba Saluja was in the Reim Empire to learn Magoi Manipulation from the Yambala Gladiator Tribe in the Colosseum.

The Reim Empire is the supreme ruler of Western Continent, and it was established 730 years ago by Emperor Remus, and under the ruler of Emperor Perdinaus, it reached its maximum expansion 211 years ago. Excluding the Kouga Empire, whose existence is close to that of a legend, Reim is the "strongest and largest country" that continues to exist in the recorded history of the world. Even the strong Parthevia Empire, who opposed Reim in the past, was forced to yield some parts of its territory.[1]

At its height, the Reim Empire has become vastly prosperous and a leading economic powerhouse with its city of Narpolia, exceeding the Balbadd Kingdom. Their international trading and diplomatic influences is extended to the isolated Sasan and Artemyra Kingdoms due to the Sinbad establishing the Sindria Trading Company.

For the past 200 years, the Magi Scheherazade has supported several generations of the Reim Empire's royalty and generals as the Great Priestess.

Although known as the Reim Empire to the world, it is actually a Republic with an elected monarchy where the emperor is elected by the Senate.

A place used for theater performance or plays, it is one of the two highest interests in Reim. Much of the audiences were nobles and politicians. The success and popularity of a play depends on the spread of gossip throughout the nation.

The Reim Empire Colosseum is a popular fighting arena where famed gladiators and slaves fight to the death at the entertainment of the audience. It is also the place where the Yambala Gladiators stay to hone their skills.

It is one of the two highest interests in Reim, more than half of population of gladiators are slaves, foreigners and free people comprised from various backgrounds can become a gladiator as a line of work. They were extremely popular especially to noble women.

Gambling Halls are one of the popular entertainments and major businesses in Reim. The SML Brothers became wealthy casino owners.

A place for a communal need of cleanliness, it is one of the popular entertainments in Reim.

Three people from Reim Empire are Dungeon Capturers and King Vessels: Ignatius and Muu of the Alexius Family and Nerva Julius Caluades of the Imperial Family. They were invited by Scheherazade to capture the dungeons that she summoned.

As one of the world's superpowers, the military of the Reim Empire arguably is the strongest and largest in the world, possibly the most technologically advance due to its invention of gunpowder and airships, they also possessed intelligence unit to which they send spies to countries that considered a threat to the empire. They were able to defeat the Parthevia Empire in the past, whom of which was forced to yield some territories and lost its superpower status. Ignatius Alexius is the Supreme Commander of the army, and also Scheherazade has greater political and military power that she's able to command large forces to invade Magnostadt and is able to approve allying with the Seven Seas Alliance, she also provides clones for espionage and intelligence gathering (Titus Alexius for example). They also possessed a powerful naval fleet for transporting troops.

The Reim Empire entered a confederation with the Seven Seas Alliance before the war with Magnostadt, initially the concern of Magnostadt's dark activities and to put Kou Empire's aggressive expansion in check.

The Reim Empire has an army consisting only of Fanalis, called the Fanalis Corps. They were slaves until Muu Alexius searched for them around the world under the name of Alexius Family and Scheherazade's authority.

Community content is available under CC-BY-SA unless otherwise noted.
Advertisement