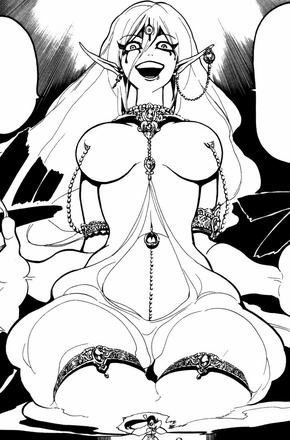 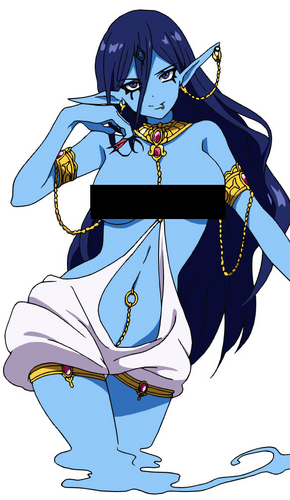 Paimon (パイモン, Paimon) is Hakuei Ren's Djinn. Paimon is a wind Djinn and the Djinn of Maniacal Love (狂愛, Kyōai) and Chaos (混沌, Konton). Paimon was in the 9th Dungeon.

Paimon takes the appearance of a beautiful, buxom woman with long hair and pointed ears. She has markings around her eyes and her fingernails are grown very long. She has multiple piercings on her ears and nipples with an array of jewelry. Her lack of clothing reveals most of her body including her bare breasts and belly. Like all the Djinns, Paimon has a third eye in her forehead.

Befitting of a creature of maniacal love and chaos, Paimon is a very flirtatious, seductive Djinn. She likes to play around as seen when she was teasing Ugo who is weak against females. She is very loyal to Hakuei, saying she will make her King.

Paimon used to live in Alma Torran and was part of King Solomon's Household. She was in good terms with Zagan and Amon and she is the one who stop Zagan and Amon in bickering.

Paimon, along with the rest of the Djinn, were created by King Solomon from Rukh.

When Aladdin touches Hakuei's Metal Vessel, Paimon appears asking who will become a king, although she's already on contract. She introduces herself and wonders where Hakuei got enough power to summon her, but realizes that Aladdin, a Magi, is there. Then, Ugo appears before her what makes her happy to meet someone extraordinary again. At first, she teases him but quickly talks to him and learns what's happened. She comes back to Hakuei's side and announces that she understands the situation and knows about unusual things going around the world now, but, as she clings to her, she says she doesn't care about it. She wants to give Hakuei a power to become the king. Aladdin asks her about what "Magi" is, much to her surprise. She tells him about who Magi is and what is his role. She also mentions that Hakuei has been chosen as King Vessel by another Magi. She then asks him if he's chosen his own king before.[1]

Paimon is briefly shown in Aladdin's projection with the Djinn praising Solomon for uniting different specimens of the world. When Leraje sees Focalor flirting with other women, and she feels angry for loving a cheater, Paimon suggests that Leraje must love her instead of Focalor.

When the people are sent away from Alma Torran and the Djinn are left, Ugo visits Paimon's city where she stated that she would have been happier that Aladdin is a girl and asked for Ugo's response. He becomes scared and flustered at the advancing girl and states that he felt awkward in the city and asked to leave.

Paimon has the ability to control the 5th type of Magic, Wind.

Paimon is a fecundity type of Djinn, meaning she is capable of reproducing, which maybe the reason Hakuei's Household consists of Seisyun Ri, Dorji, Bator, Boyan, and more than 100 other members of the Kouga Clan.

Paimon's Metal Vessel is a flabellum with a metal handle with feather like appendages.

When Hakuei uses this attack, she creates a huge tornado with her in the middle. The tornado starts to spiral and destroys everything in its path.

When Hakuei equips with Paimon, she gains gold, pink and white armor. Hakuei gains the same metal chains Paimon has on her nipples, and her flabellum transforms to look similar to a trident. She also gains light colored (probably white) feathers all around her body and her hair near the face is all made of feathers too. She has a metal headband around her head, and her hair turns to a light color, and is tied into a low tail. She also has a a belt, resembling Kouha and Kouen's one, on her waist. Her Djinn allows her to create small and large tornadoes to protect her and attack her enemy. These tornadoes are powerful, but because of her lack of Magoi, it doesn't last long.

When using this Extreme Magic, Hakuei summons an tremendous tornado that ensnare an opponent in its center and shatters the opponent with it's extreme wind power.

Paimon calls Hakuei "Hakuei-chan" as a sign of endearment for her. [2] She claims to not care about the affairs of the world and wants to dedicate her power into making Hakuei "King".

Community content is available under CC-BY-SA unless otherwise noted.
Advertisement