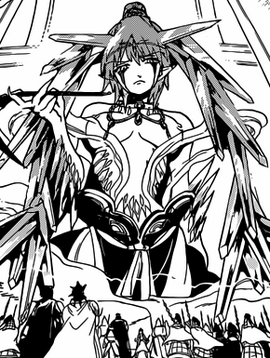 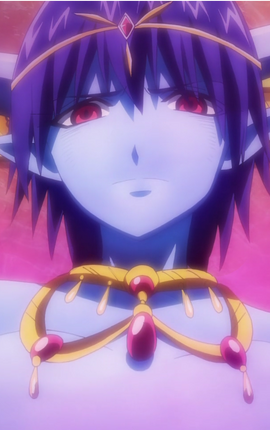 Leraje's hair seems to be made of some type of crystal, and some parts of her body are also covered by crystals. She has pointed ears and wears make-up that always seems to be melting. Her torso is bare and she wears some kind of skirt, a headband, and an elaborate necklace. When she was in her Dungeon she was shown smoking a scythe-shaped pipe. Like all the Djinn, Leraje has a third eye in her forehead.

She seems somewhat vain and doesn't really care for much things. But she chose Kouha stating that she wouldn't fall for a cheater (Kouen Ren) since he already had three Djinn. And also, because he gave hope to outcasts like Reirei and her sisters. She does show a caring side as she begged Aladdin and the others to help stop the "Black Sun".

She seems to have a weakness for attractive men, like Kouen and Focalor.

Leraje used to live in Alma Torran and was part of King Solomon's Household. Leraje, along with the rest of the Djinn, were created by King Solomon from Rukh. In Alma Torran, she was in a relationship with Focalor but he was cheating in front of her with many women.[1]

Leraje appears as a flashback from Kouha's memories. Leraje's still in her Dungeon, talking with Kouha. She tells him that if she was a normal Djinn she would choose Kouen, but since Kouen already controls three Djinn is a cheater. She adds she doesn't want to see a world ruled by a single and absolute king but a king and his strong retainers who wouldn't even lose to him and work together in order to build the world. When Kouha says that in that case he'll be part of Kouen's household Leraje contradicts him, saying he isn't fit to be the vessel for a household. She says she understand what kind of person Kouha is by looking at the eyes of his men. She thinks maybe Kouha won't end up being the king of this world because almost anyone who lives bathed in the sun probably won't choose a man like Kouha as King.[2]

After Aladdin summons Kouen's Djinn, Agares, Astaroth and Phenex, he also summons Amon and Leraje. The five Djinn ask the Magi if he summoned them. Leraje, along with the other Djinn, listens while Amon explains the situation and after his speech she begs to the Dungeon Capturers to don't let this world die or else it'll be the same as Alma Torran. Astaroth cuts her off since the humans of these world shouldn't even know about the existence of the other world. Leraje and the other Djinn are stunned when Aladdin agrees to tell everything to Kouen if he helps him to destroy the Medium, and she asks to the Magi if he's sure about that. While all the Dungeon Capturers Equips, the Djinn say that they leave everything to them, their King Vessels.[3]

Leraje has the ability to control the 7th type of Magic, Strength/Power.

In this form, Kouha's hair grows longer and turns a lighter shade. He has spikes coming out of his back that take the shape of wings. He gains a sideways third eye in the middle of his forehead. His arms and legs are both become clad in the same spikes which take the shape of armor. He wears a necklace and arm bracelets on both arms.

When using this Extreme Magic, the Symbol appears above an wide area over whatever he attacks. Kouha slashes down, which cause a large amount of  to pulverize everything within the vicinity of the Metal Vessel Symbol and push everything into a deep crater.

When equipped the sword becomes a scythe on one side and a hammer on the other. The Scythe side can be used to create swift slashes that are capable of traveling to certain distances. The Hammer side can be used to apply great pressure to a certain region. It still retains it's ability to change size at will.

She seemed to be going out had a crush on Focalor, but due to his constant womanizing, she began to hate men who "cheat".

Retrieved from "https://magi.fandom.com/wiki/Leraje?oldid=73819"
Community content is available under CC-BY-SA unless otherwise noted.