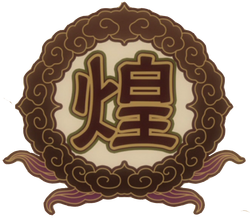 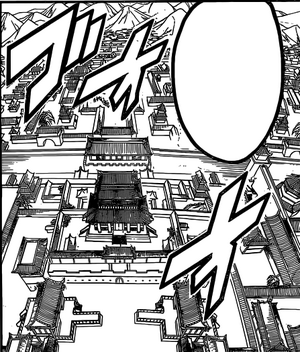 Episode 4 (mentioned)
Episode 5 (debut)
The Kou Empire (煌帝国, Kō Teikoku) is a large military nation, considered one of the most powerful in the current era because of the number of Dungeon Capturers and armies it controls. Their High Priest is Judar, one of the five Magi of the current era. The capital is Rakushou. The empire is also described as very aggressive, using any reason to attack another nation.

Recently, the Empire suffered from bankruptcy after Sinbad implemented the four rules in the world causing abolition of slavery and military service, which was the main factors of the Kou Empire. When Alibaba came back, he helped Kougyoku and the Kou Empire to create its own trading company, the Fanfan Trading Company. With Koumei's idea of using teleportation circles, Alibaba travels to negotiate with other countries to set up a Kou Empire trading outlet which houses the teleporation magic tools. Alibaba succeeds, and when he tries to negotiate with Parthevia and Sinbad, Parthevia rejects the trade deal due to Sinbad's negative rumors. To combat the negative rumors, Alibaba creates positive public relationships through commercials where customers such as Budel, Sahsa, and Leila promoted Kou Empire products.

Although it was just a small kingdom in the Far Eastern Central Plains, Hakutoku Ren, managed to unify the two neighboring kingdoms (Kai and Gou) under its banner, founding the Kou Empire. It expanded into the central plains after borrowing power from the "oracle" Judar, who was brought there by Al-Thamen.

The Ren household, which has ruled on the commoners for centuries[3], are the rulers of the Kou Empire.

Hakutoku Ren, the First Emperor, founded the empire. He had four children with his wife, Gyokuen Ren.

When Hakutoku Ren and two of his sons died during a revolt, his brother Koutoku Ren, who had ten children with at least three different women, became the Second Emperor. Although, at that time, Hakuryuu Ren, the youngest son of Hakutoku Ren, had succession rights that were superior to that of Koutoku Ren, he was, however, young and on the verge of life and death, hence why the seat of the Second Emperor were given to Koutoku. Koutoku adopted the remaining siblings, Hakuei and Hakuryuu and soon after married Gyokuen. After Hakutoku’s death, Gyokuen became the new Empress, as that was what was written on the Second Emperor’s will. She was later overthrown and killed by her son, Hakuryuu, who took back what is rightfully his.

Six members of the Imperial Family are Dungeon Capturers and King Vessels. Five of them were invited by Judar to capture the Dungeons that he summoned, excluding Hakuryuu, who was sent by Sinbad to the 61st Dungeon, Zagan, in the Torran Village located near Sindria's territory. Later, Judar invited Hakuryuu to capture the 68th Dungeon, Belial.

Slavery is legal in the Kou Empire and in the countries under its government.[4] However, the slavery system is considered "humane", since slaves are freed after 5 years of service. Also, mistreatment is prohibited by law.[5]

Political marriage is a diplomatic union of two members of different royal or ruling families. The Second Emperor, Koutoku Ren, used his daughters to marry off rulers of different countries. One of it's traditions, wedding partners are not allowed to see each other before the wedding ceremony.

Al-Thamen is currently reside in the Kou Empire posing as Imperial Priests and their leader, Gyokuen Ren, became its Empress. Al-Thamen gain political power and influence in the Imperial Court, such as orchestrating the assassination of the First Emperor and his two eldest sons and later placing Gyokuen Ren as the Third Empress following the death of the Second Emperor. However, Hakuryuu Ren and his army managed to overthrow them, killing Gyokuen Ren and enslaving the rest.

The Kou Empire is one of the world's superpowers. It takes advantage of its Dungeon Capturers to invade other countries. Recently, they have even acquired dungeon monsters for their army. They also possessed a powerful naval fleet and flying carpets for transporting troops.

Magicians are also employed within their ranks and are stationed in various locations, which they transmit communication through long-range Clairvoyance Magic. However, this was a highly classified secret.

A large and powerful expeditionary army, led by the General Commander and First Prince Kouen Ren, is bent on expanding the empire and aims to subjugate/invade the western world. The army and particularly its generals are extremely loyal to Kouen, to the extent that they are willing to fight Gyokuen Ren and Al-Thamen, and later Hakurou Ren and his Eastern Army on his behalf for the throne.

Currently, they were stationed at Balbadd and later became their capital at the start of the Kou Civil War, the Western Subjugation Army became the Western Army with 80% of Kou's military, resources, and territories.

Alongside Kouen are his brothers - Second Prince Koumei Ren, who serves as his advisor, and Third Prince Kouha Ren, who commands the vanguard - as well as General of the Left Kokuhyou Shuu and General of the Right Seiryuu Ri, but later both later joined Hakuryuu and his Eastern Army. Kouen has four powerful Household members under his command, each of whom can easily kill several Black Djinn.

The army is divided into corps and divisions, some led by members of the Imperial family, all of them are Dungeon Capturers.

The vanguard forces of the Western Subjugation Army led by the Third Prince, Kouha Ren. Many members of his forces are social outcasts, which makes them highly controversial within the Imperial Court. Some of the most prominent members are Meihou Kan, and three artificial magicians, Jinjin, Junjun and Reirei.

Part of the Western Subjugation Army, led by First Princess Hakuei Ren, and stationed in the Northern Tenzan Plateau. Among Hakuei's ranks are her assistant and Household member, Seisyun Ri, and her former subordinate, Ryosai overthrown Hakuei for the control of the army until he was subdued by Aladdin and Ugo. After Hakuei subdued Ryosai's loyal forces, she recruited more than 100 members of the Kouga Clan, called the Kouga Household Corps. All of them are part of Hakuei Ren's Household and they use the power of Hakuei's Djinn, Paimon.[6]

They are Hakuryou's main army representing 20% of Kou's military, resources, and territories at the start of Kou Civil War when he proclaimed Emperor after he and Judar eliminated Gyouken and the Al-Thamen. Many of its soldiers and the remaining Al-Thamen were brainwashed and enhanced by Hakuryuu. Among Hakuryou's high-ranking members are General of the Left Kokuhyou Shuu and General of the Right Seiryuu Ri, and High Priest Judar.

Huang is the paper money circulating within the Kou Empire, and the "money" the empire force other nations to use in trading with it. Unlike gold, the value of Huang changes constantly; items that only cost 1 Huang could require 2 Huang another day. The lending of Huang (at least within international trading, as seen with Balbadd) also come with "interest" which is an additional amount of Huang the borrower needs to pay back to the empire. The countries supplied with Huang become dependent on the Kou Empire and accumulate large debts.[7]

Retrieved from "https://magi.fandom.com/wiki/Kou_Empire?oldid=77786"
Community content is available under CC-BY-SA unless otherwise noted.