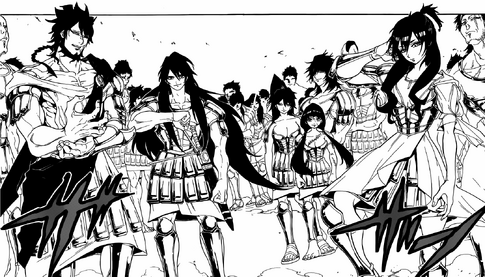 The Fanalis Corps (ファナリス兵団, Fanarisu Heidan) is an army consisting of only Fanalis. It is a part of the army of the Reim Empire. Its captain is Muu Alexius, a King Vessel chosen by the Reim's Magi, Scheherazade. It is known that at least two members of this army are part of his Household, his sister Myron Alexius and Lo'lo'.

Muu Alexius searched for the Fanalis of the corps (who were slaves) with the authority of Reim's Emperor and Scheherazade.

During the war between Magnostadt and Reim, the Fanalis Corps took part in the battle against the Magicians and nearly took the capital until Aladdin and Alibaba Saluja intervened.

Retrieved from "https://magi.fandom.com/wiki/Fanalis_Corps?oldid=63100"
Community content is available under CC-BY-SA unless otherwise noted.