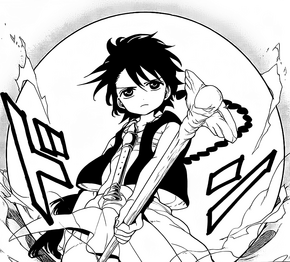 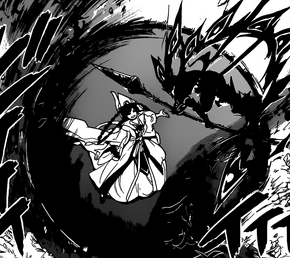 Borg ( Borugu, "Magic Barrier") is said to be the proof of a Magician. It is a defensive ability. It uses Magoi to cover the user's surroundings to block out attacks with evil intentions. It also blocks out most physical attacks and magical attacks to some degree. Its strength, however, depends on the person. According to Professor Myers, if the Borg is attacked by immense physical strength, then it can be crushed/destroyed.

In the case of the Magi, it seems that they are unable to dent their Borg because of its hardness unless a Metal Vessel or a Household Vessel is used. It seems that it can be distorted to change its strength in a particular region. It is also possible to create a massive Borg barrier but it requires a large amount of Magoi to maintain it.

Although Borg is a defensive ability, it can also be extended offensively. This magic has been named Borg Al-Samm ("Eight-Headed Defensive Wall"), which creates dragon-like heads out of the Borg which can be used as an offensive attack. Even in the offensive form, Borg Al-Samm is capable of defending the user from magic attacks, as Arba is able to defend herself from Ramz Al-Salos cast by Judar in this form. Only three people are seen to be capable of doing this: Sheba, Arba, and Aladdin.

Retrieved from "https://magi.fandom.com/wiki/Borg?oldid=73001"
Community content is available under CC-BY-SA unless otherwise noted.