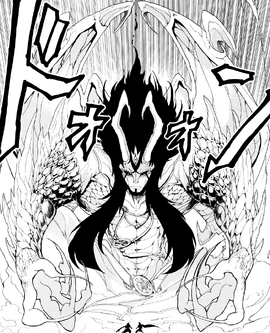 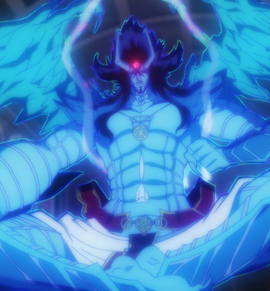 Baal (バアル Baaru) is one of Sinbad's seven Djinn. He is a Lightning Djinn and the Djinn of Wrath (憤怒, Fundo) and Heroes (英傑, Eiketsu). Baal was in the 1st Dungeon.

His appearance is similar to that of a dragon, with bat-like wings, scaly skin, and horns. He has dark, shaggy hair and a third eye in his forehead. He wears two necklaces and a belt.

He seems to be angry all the time, with his inorganic-looking face. But he is actually tender-hearted. Also, he is a strait-laced person.

Baal used to live in Alma Torran and was part of Solomon's Household.

Baal, along with the rest of the Djinn, were created by King Solomon from Rukh.

Baal shows up in his own Dungeon when Sinbad touches the lamp, surrounded by lightning. He introduces himself as the Djinn of Wrath and Heroes and asks who will become a King. Both Sinbad and Drakon claim that they will become one and start arguing over it. They decide to settle the matter by themselves, which Baal lets them do. He says that he looks forward to his lord showing what he has.[1] When Sinbad defeats Drakon, Baal states he witnessed it clearly and approves him as his lord. He gives Sinbad the power he yearns for and joins him by getting into his sword.[2]

Baal is then summoned by Yunan to help him and Sinbad with soldiers. He asks his lord if he needs his assistance.[3] He then takes care of the soldiers and joins Sinbad's Metal Vessel right after.[4]

Sinbad is Baal's Dungeon Capturer. As a Djinn, he can alter his size and rule his Dungeon. After he conquered, his Lightning Magic are being used by Sinbad. Baal's Metal Vessel is the sword that Sinbad has on his side. Members of Baal's Household are Ja'far, Masrur and Drakon.

Djinn Equip: In this equip, Sinbad takes on the appearance of a dragon and gets two horns and a jewel on his forehead and an elaborate necklace along with blue scale-like armor over parts of his body and a long tail. He is able to attack with Lightning Magic in this form.

Retrieved from "https://magi.fandom.com/wiki/Baal?oldid=77697"
Community content is available under CC-BY-SA unless otherwise noted.