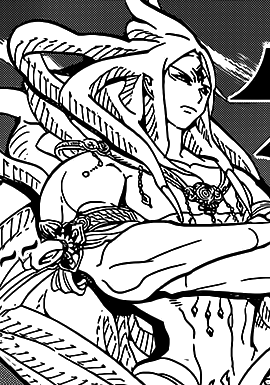 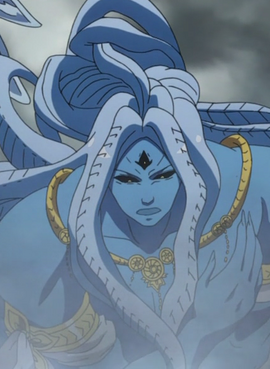 Astaroth (アシュタロス, Ashutarosu) is one of Kouen Ren's three Djinn. Astaroth is a fire Djinn and the Djinn of Terror and Meditation. Astaroth was in the 29th Dungeon. He was the leader of the Gorgon tribe in Alma Torran.

Astaroth has a long, snake-like hair. He also has a third eye on his forehead. He is well-built, and wears necklaces and other ornaments on his forearms. Scales are visible on his body and he has dragon-like claws.

Like the other Djinn, Astaroth shows deep respect towards Aladdin, who is a Magi. Also, Astaroth gives priority to the ancient rules set by Solomon, but is ready to go around them should the circumstances only leave that option. He is also very loyal to his master, Kouen.

Astaroth used to live in Alma Torran and were he was both the chief of the gorgon tribe and part of King Solomon's Household. Astaroth, along with the rest of the Djinn, were created by King Solomon from Rukh.

Aladdin demands Kouen Ren to send back his soldiers, but since he doesn't seem to believe him, he summons Kouen's three Djinn. Astaroth comes along with Agares and Phenex, and while bowing, as the other two says to Aladdin, We are here to serve you, our "King" and the reincarnation of our past "Great King".[1]

Immediately afterwards, Aladdin also summons Amon and Leraje, and all the Djinn ask Aladdin if he called them. Amon explains the situation while the other Djinn listen. After his explanations are over, Leraje begs everyone to not let the world end like Alma Torran, but Astaroth reminds her that it's taboo. He says that the humans shouldn't know about the existence of the other world. When Kouen grabs the Magi and orders him, with a scary expression, to tell him everything, Astaroth, as well as Phenex and Agares, is horrified by this, and with his comrades, begs his King to stop being so rude towards the Magi. Aladdin accepts telling everything to Kouen if he helps to destroy the Medium, and all the five Djinn are incredulous by that. While all the Dungeon Capturers Equips, the Djinn say that they leave everything to them, their King Vessels.[2]

Kouen Ren is Astaroth's Dungeon Capturer. As a Djinn, he can alter his size and rule his Dungeon. After he conquered his Fire Magic are being used by Kouen. Astaroth's Metal Vessel is Kouen's favorite sword. The only known member of Astaroth's Household is Seishuu Ri.

Djinn Equip: In this equip, Kouen's hair becomes longer and resembling snakes, like his Djinn's. He has a heavy necklace around his neck and decorations on his forearms. A dark tattoo on his stomach appears and he also wears a belt.

Retrieved from "https://magi.fandom.com/wiki/Astaroth?oldid=67559"
Community content is available under CC-BY-SA unless otherwise noted.