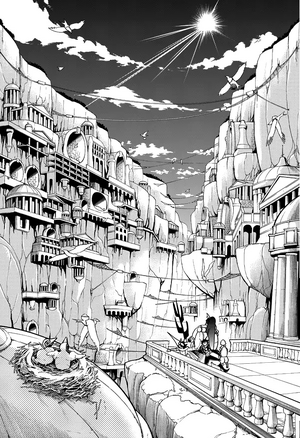 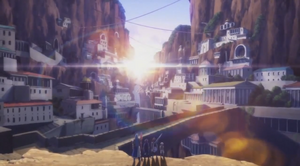 Artemyra (アルテミュラ, Arutemyura) is a small country with a similar size as Sasan Kingdom and part of the Seven Seas Alliance. A matriarchal nation with a special bond with animals (particularly, giant birds) and reside in the sky, which is why it is called, the City of the Sky. It was ruled by Queen Mira Dianus Artemina and is the homeland of Pisti.

The country is located in the middle of the Unexplored Region or in the southeastern area of the continent. It is also located in the world's largest ravine and has a hot and humid climate. Similar to Sasan Kingdom, the country was surrounded with difficult terrains, it can only be reached by foot by travelers. But for the Artemyra people, they can travel within the country or outside world via giant birds.

It is said that the Artemyra people broke away from the Dark Continent and settled in the world's largest ravine, making living in the cliffs.

Prior to the Seven Seas Alliance, few countries such as the Reim Empire maintained trade and friendly relation with Artemyra. After joining Sinbad's Sindria Trading Company, Artemyra became more open to the outside world and began an international trading with more countries.

As a matriarchal nation, its gender role is reverse to the rest of the world. The country is dominated by warrior women with strong feminist views, although they well-treated the men of their own country. The people are open-minded to sex; red-light districts and same-gender affection are a norm. They also practice divorce.

The warrior women of Artemyra are not only possessed courage and martial skills, they are the only one who can control the giant birds. Their role is similar to men the outside world when it comes to hard labor, defense, politics, and diplomacy.

The men of Artemyra's role and behavior are similar to women from the outside world, they take care and protect the household and children which is why they are seldom seen in public. They often do side jobs such as they also help maintain Artemyra's economy of extracting precious gems and also working in red-light districts to soothe busy women.

The Artemyra populace has a symbiotic relationship with giant birds (Only women can control them). The giant birds are essential to their culture and everyday lives, such as aerial defense and transportation not only within the country but also for international crossing and trading after joining the Seven Seas Alliance.

One of Artemyra's valuable export is previous gems and their valleys possessed such massive natural deposits. Because of dens of poisonous snakes in the valleys, the Artemyra people relied on giant birds to extract the precious gems by throwing down the meat into the valley and giant birds bring back the meat with the gems stuck to it.

Retrieved from "https://magi.fandom.com/wiki/Artemyra?oldid=75085"
Community content is available under CC-BY-SA unless otherwise noted.