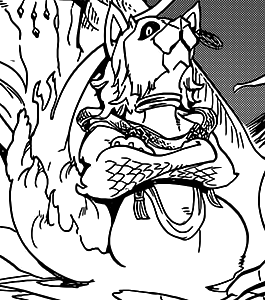 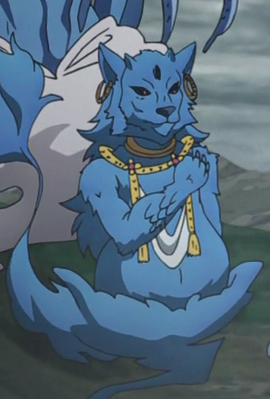 Agares (アガレス, Agaresu) is one of Kouen Ren's three Djinn. Agares is an earth Djinn and the Djinn of Fortitude and Creation. Agares was in the 2nd Dungeon. He was the chief of the Manticore tribe in Alma Torran.

Agares resembles a fox, having crocodilian scales as skin.[1] Like all the Djinn, Agares has a third eye in his forehead.

Like the other Djinn, Agares shows deep respect towards Aladdin, who is a Magi. Also, Agares gives priority to the ancient rules set by Solomon, but is ready to go around them should the circumstances only leave that option. So far, Agares is yet to show any particular animosity towards his brethren.

Agares used to live in Alma Torran and was part of King Solomon's Household. Agares, along with the rest of the Djinn, were created by King Solomon from Rukh.

Aladdin demands Kouen Ren to send back his soldiers, but since he doesn't seem to believe him, he summons Kouen's three Djinn. Agares comes along with Astaroth and Phenex, and, as the other two, says to Aladdin, We are here to serve you, our "King" and the reincarnation of our past "Great King".[2]

Immediately afterwards, Aladdin also summons Amon and Leraje, and all the Djinn ask Aladdin if he called them. Amon explains the situation while the other Djinn listen. When Kouen grabs the Magi and orders him, with a scary expression, to tell him everything, Agares, as well as Phenex and Astaroth, begs his King to stop being so rude towards the Magi, although he doesn't change his expression. Aladdin accepts telling everything to Kouen if he helps to destroy the Medium, and all the Djinn are incredulous by that, though Agares doesn't show much on his face. While all the Dungeon Capturers Equips, the Djinn say that they leave everything to them, their King Vessels.[3]

When Agares was a manticore he was given a modified Divine Staff that was only able to use one type of Magic.

Kouen Ren is Agares' Dungeon Capturer. As a Djinn, he can alter his size and rule his Dungeon. After he conquered his Gravity Magic are being used by Kouen. Agares' Metal Vessel is the spaulder on Kouen's right arm. The only known member of Agares' Household is Kokuton Shuu.

Djinn Equip: Kouen's hair becomes wild and resembles a lion, like his Djinn's and he appears childlike. He has a heavy necklace around his neck. His metal vessel transforms into a demon-like hand, with scales, claws and the Djinn circle on the back. He also grows a tail. A dark tattoo on his stomach appears. He also wears a belt. He is shown to be very powerful as he fired a beam of light from his hands that was powerful enough to remove a large cylindrical piece of earth that span through several meters of the earth and stimulate a lava flow.

Retrieved from "https://magi.fandom.com/wiki/Agares?oldid=63267"
Community content is available under CC-BY-SA unless otherwise noted.